It has been a busy two weeks. Beside my own projects running now (yuzzzz!!), I had the pleasure to join a team of local creative artists and authors (writers). Biblioteka Nashonal Korsou, our local library, has been taking this great initative to organize for the past 3 years a book week. Actually two weeks. It’s called “Siman di Ban Lesa” (Week of Reading). We’ve visited all the elementary schools that participated and it was such great fun, but also a great experience to work side by side with others to give the importance of reading to this generation of kids. So I want to dedicated this week of the blog to this program. Each day I’ll be presenting a writer/author I’ve worked with for the past two weeks.

The first week I worked with the lovely Migarda Raphaela. I met her at the opening night (which presented us with an awesome show) and we immediately clicked. So, that was a good start for me. As I am an artist in my own way with my interior designing/styling and photography, I was wondering for myself how the heck I was going to smash up with her storytelling. Migarda has been back on the island for about 6 months, after living in The Netherlands for 30 years. She’s a life-coach, storyteller, dancer and much more. She’s been giving training to women how to empower them self. The story she brought to this program, was about Indians she visited a while back in USA. She learned about their living and more and made a cool story about a jaguar, marmot (or groundhog) and a owl. 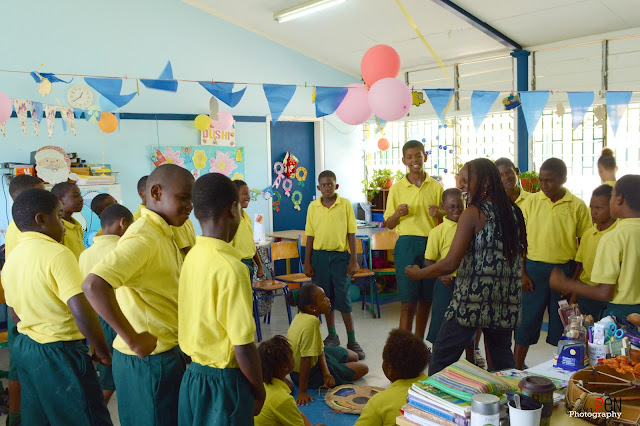 Before she starts telling the story, she shows the kids a medicine wheel that she made. It has got all the elements of nature, like earth, fire, water and the sky. She tells them that this is like a book in the Indian Village. She asked them to comment on what each element was. Every child wanted to say something. The interaction between us and them was amazing. 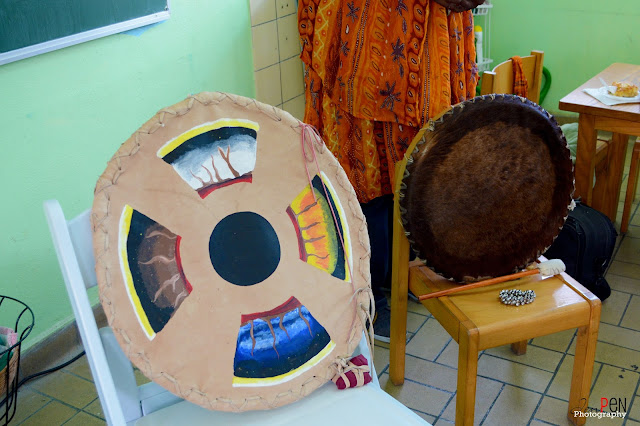 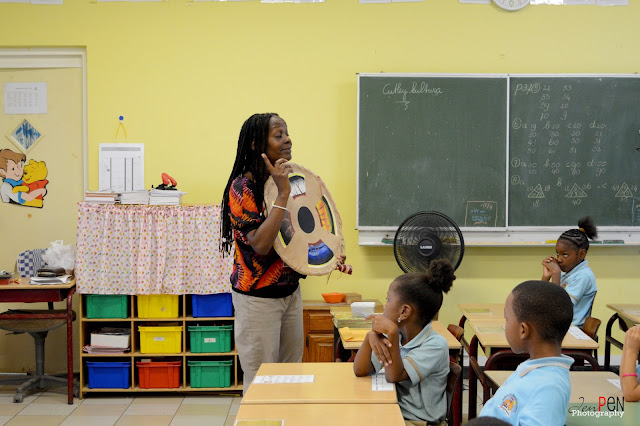 The story starts about how Twisted Hair (an Indian) goes to the village to tell the kids there a story. Migarda rolls up her hair, while every kid starts laughing. She walks around in the class, explaining what Twisty Hair does. Then she takes her drum and starts slowing beating on it. She asked the kids to close their eyes and she starts telling the story. 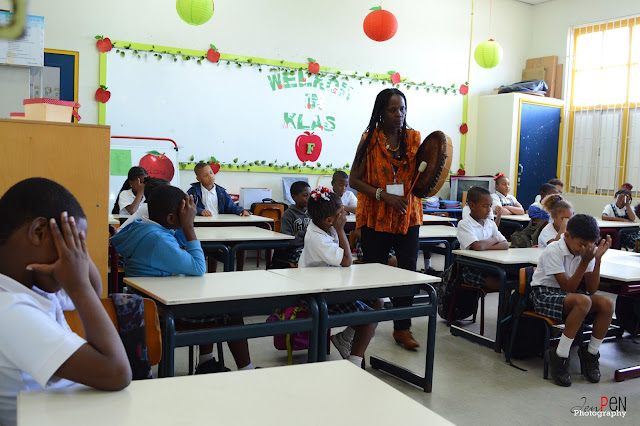 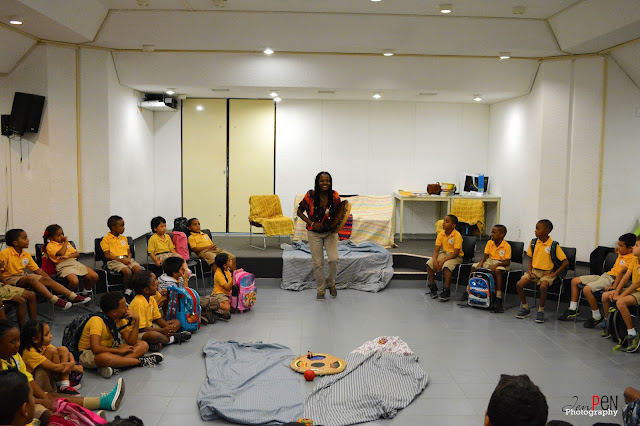 We then entered the world of the story. We’re in the woods and are about to find out about the jaguar’s position. The jaguar (which I already have asked the kids if they know what kind of animal it was, which most of them already had a clue) starts the story with a hunger that he could eat the whole jungle. He walks around looking for food. He then finds a marmot. The marmot runs into a hole. The jaguar totally happy ofcourse, cause he thinks that he’s got his food trapped. He then asked the owl that sits in the tree to look at the hole as watch that the marmot doesn’t escapes. He tells the owl if the marmot escapes, the owl is going to be his food. The jaguar then leaves to go to the river to clean up. The owl stands in front of the hole, but the marmot thinks “I’m not going to sit here and get eaten, the jaguar is gone, let’s get a move on”. The marmot slowly goes out of the hole and throws sand in the big eyes of the owl. The owl then flies away with dirt in his eyes, which gives the marmot a free walk. 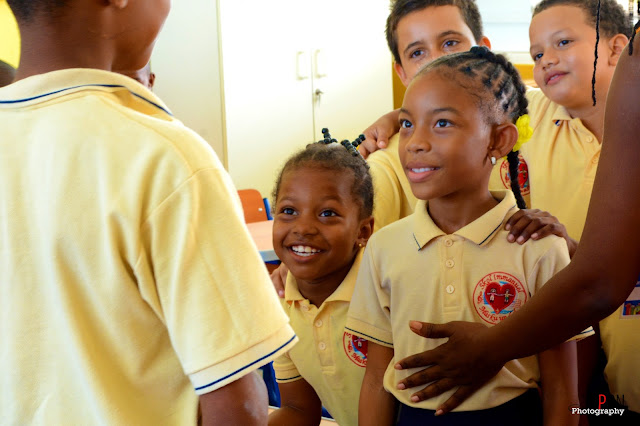 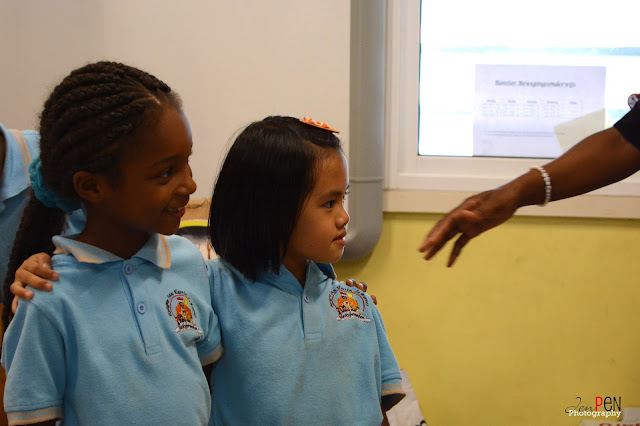 The jaguar comes back and what does he sees? Nothing!! The owl is gone and so is the marmot. He’s filled with anger, because he’s so hungry. He starts to scream loudly. Eventually because of his hunger, he sees everything as food. He sees fire as food and then burns himself ofcourse. He then sees  water (sea) as food. The water then explains to him that he’s not afraid of the jaguar. He tells the jaguar that not even the Indians are afraid of him. Jaguar thinks he’s the biggest of all and wants to show the water that his wrong. So he goes to the village to attack the Indians. To his surprise, the Indians weren’t afraid of him and attacked him. The water turns into rain and pours down on the Indians and later on Jaguar. 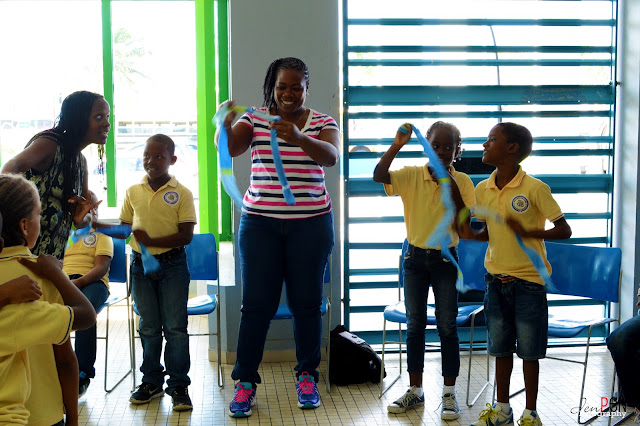 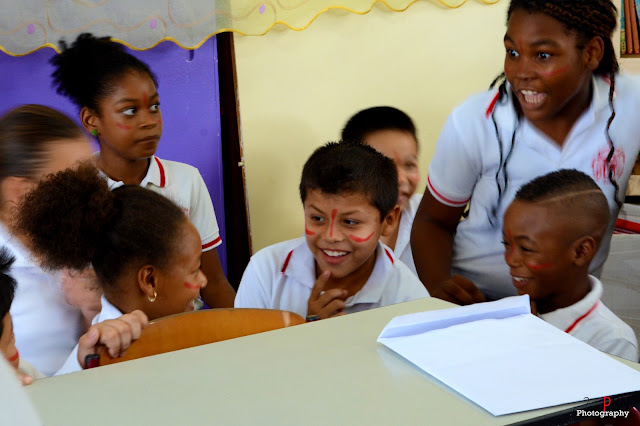 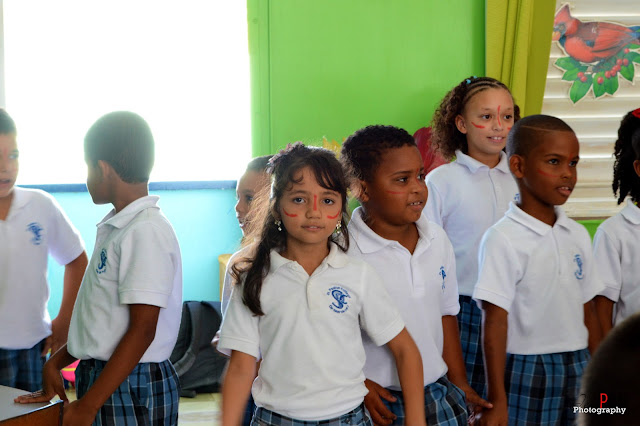 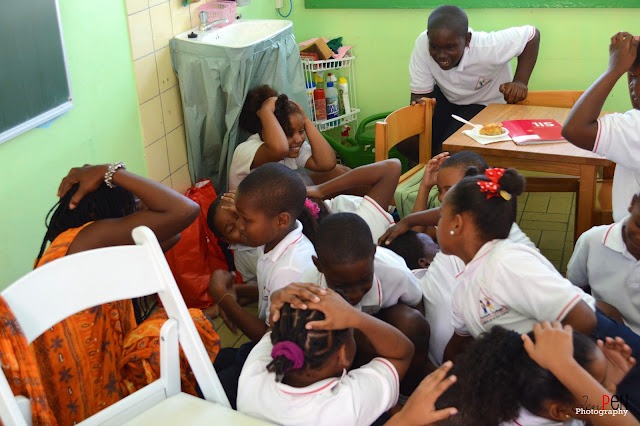 The lesson from the story was that don’t think that you are better than others and thinking you can do everything better. The jaguar thought because he was big and strong, he can do and say whatever he would like to. But the marmot, owl, fire and water showed him otherwise.

Afterwards everybody got the chance to say what they learned about the story. Migarda introduced then the talking stick. Whoever had it in his/her hands, would have the chance to talk and the others would listen. 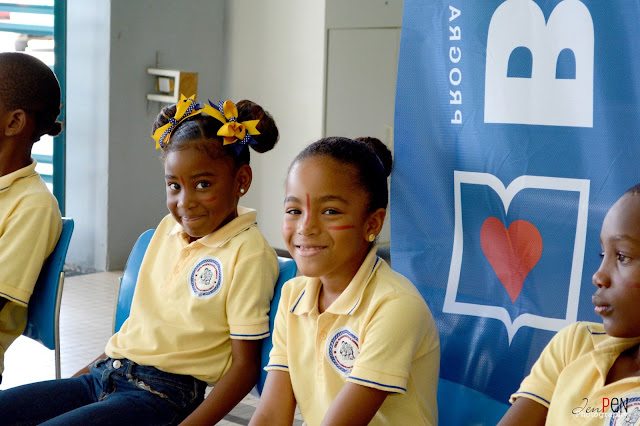 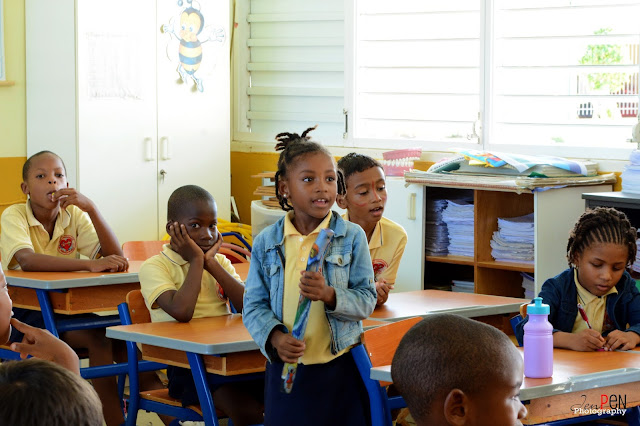 It was a great week and one extra time in the second week to work with Migarda and let her story come to life with the kids. We visited several schools and many of the teachers were also very excited to participated in the story and we were very grateful for that.
More information about Migarda and her work, please check out her website for about storytelling and her work about empowerment.
Tomorrow I’m going to share the day I had with another author.
Do you have book week at your town or city? Please share with me below.